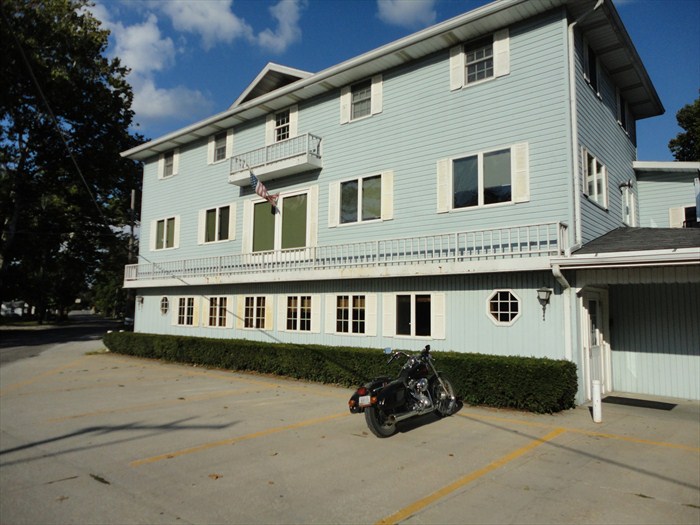 The Barbee Hotel was considered a very high-class resort during Al Capone's time. He stayed in the hotel frequently, often clearing out all the guests so he could stay in seclusion. He always stayed in room 301 at the back of the hotel.

The Barbee Hotel was considered a very high-class resort during Al Capone's time. He stayed in the hotel frequently, often clearing out all the guests so he could stay in seclusion. He always stayed in room 301 at the back of the hotel.

When cleaning the rooms employees have smelled cigar smoke and when investigated it is coming from room 301. The bartender who has worked there for years has seen an old man sitting at one of the booths on several occasions. When she goes to get someone, he is gone.

People have reported hearing footsteps on the stairs, and in the halls above the dining area. Many parties when taking their picture will line up on the stairs. There are several pictures on the wall where you can see orbs of light in the background behind the group. Many other celebrities stayed there as well. Rita Hayworth was said to go and stay in her room for days at a time. When you drive by the area of the hotel she stayed in late at night sometimes you can see a faint light.

The Barbee Hotel in Northern Indiana was a popular spot for Chicago gangsters to get away from the city in the 1920's. One of the guests was none other than Al Capone himself.

It is believed that many of these gangsters returned to the hotel in death. Staff members have reported seeing an old man sitting in a booth after closing. When staff members talk to him there is no response. Thinking they are dealing with an unruly customer they leave to get assistance. However, upon returning the bar is empty and no one has seen anyone leave.

One legend states that the hotel was a popular place that gangsters took their girlfriends to. One gangster however took the girlfriend of another gangster. She was then murdered in the hotel by the jealous thug. People have reported that they hear her wailing at night and they feel cold spots generating from the area.

Other phenomena includes the appearance of faces in photographs taken at the hotel, and more commonly orbs.

Around the hotel itself is a popular place to see orbs and apparitions.