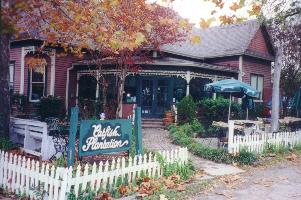 This quaint, Victorian house was built in 1895 by a farmer named Anderson.

This quaint, Victorian house was built in 1895 by a farmer named Anderson. It has a large, front porch (now enclosed), a large bay window, and a big front yard with a white picket fence. The house was used as a private residence until 1970, until it was converted to a doctor's office. Following that a few unsuccessful restaurants used the house, before it was purchased by Tom and Melissa Baker - they were completely unaware of the ghosts that lived there. The restaurant serves wonderful food, featuring catfish that can be ordered fried, blackened, or baked. The hush puppies are especially good, and we enjoyed the green beans on our visit there.

In 1984, Tom and Melissa Baker found the property, which had been empty for several years and while it was not the perfect location to start a restaurant, they both agreed that the house had a certain charm that could not be denied. Neither were big fans of the paranormal but shortly after purchasing the property, things began to happen that would make them true believers.

While only the couple had the keys to the building, Melissa began to find that she was obviously not the only one with access. One day, she came in to find a large tea urn, with neatly stacked coffee cups inside, which had somehow been transported to the middle of the floor, far away from where they belonged. On another morning, she came in to find fresh brewed coffee waiting for her!

Once opened, employees began to tell strange stories; a fry basket levitating in the kitchen, a glowing blue light illuminating a room that was otherwise empty and the ghostly figure of a bride standing by a front window. The sheer number of reports was overwhelming and paranormal investigators were invited to give their impressions of the old house. What they found was a list of characters from Waxahachie's past, each with distinct personalities, each existing independent of one other at the restaurant.

Among the resident spirits is a man who likes to "flirt" with female guest by touching their knee or shoulder or playing with their long hair; a young female who seems confused by her surroundings and "Caroline," a previous owner who sometimes becomes short tempered because she sees herself as still being the head of the household.

In 2007 the Bakers sold the restaurant and its ghostly inhabitants to the Landis Family who invited the nationally acclaimed Association for the Study of Unexplained Phenomenon to reinvestigate the locale. Using state of the art research equipment, the 40 year old ASUP confirmed several spirits, who freely interacted with the field investigators. All of the spirits at the Catfish Plantation are categorized as "friendly and positive," according to the group's chief investigator.

In a later TV segment filmed at the Catfish Plantation for the Travel Channel, one senior investigator was sitting in a side room talking about the history of the building, when he noted a shocked look on the faces of several of the folks in the room. A ghostly apparition had come to the doorway from the nearby restroom and hovered behind him for several minutes, only to dematerialize when one of the people interrupted him to say there was a ghost standing nearby. The ghost apparently was pleased to hear his story.

Today, the Catfish Plantation and the Landis Family is dedicated to offering the best in Cajun style cuisine, while keeping the ghostly traditions alive. The locale has been featured on a host of TV program on all the major networks, in newspaper and magazine articles worldwide and has welcomed those who want to learn more about their earth bound spirit residents while enjoying the best food and the warmest ambiance available anywhere!