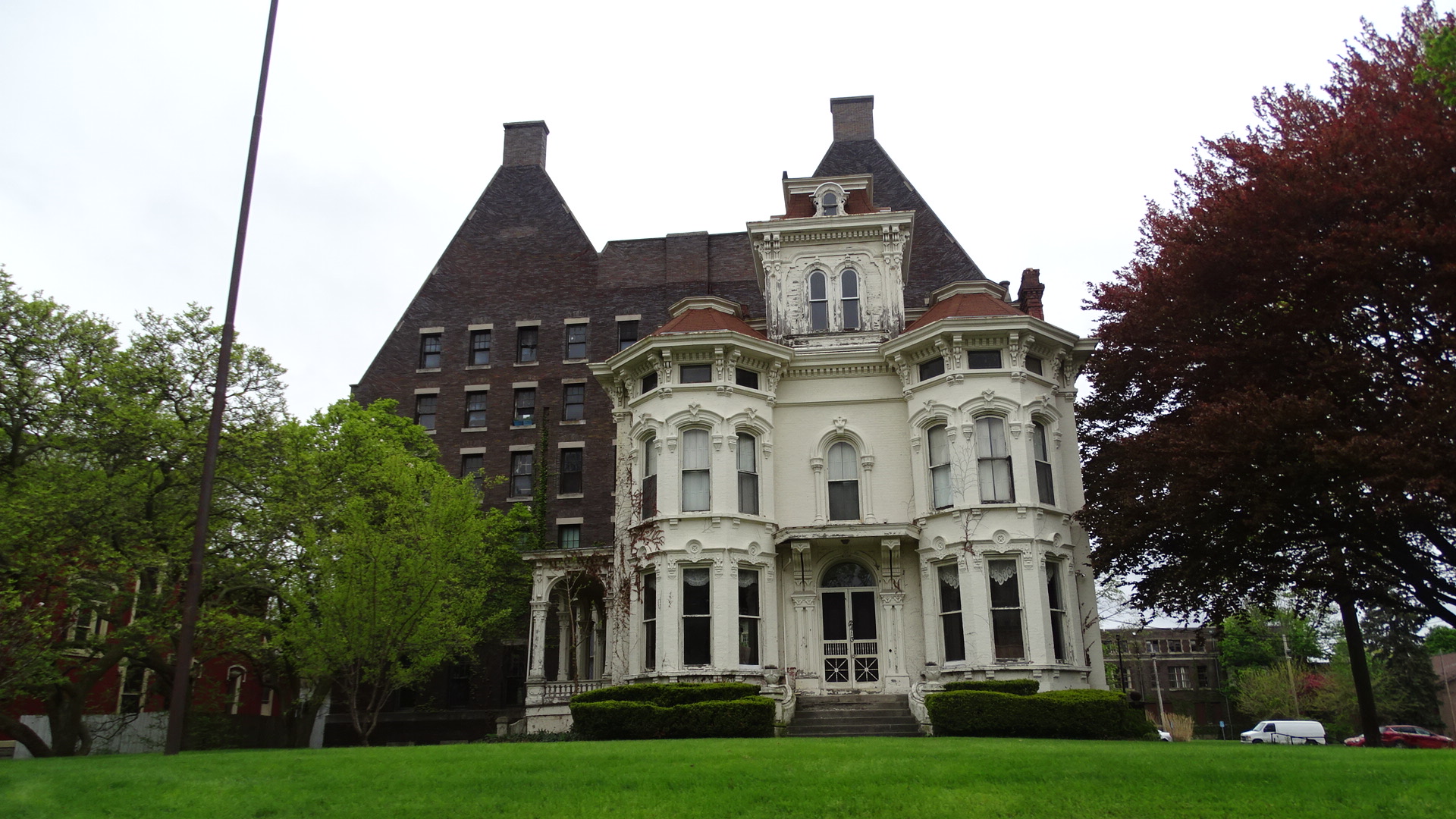 Toledo's largest and oldest structure, The Collingwood Arts Center, is an immense and ominous, 6 floored, high pitched tile roofed brick building, with an attic and huge basement, made complete with elaborately carved window frames and a mansard roofed

Toledo's largest and oldest structure, The Collingwood Arts Center, is an immense and ominous, 6 floored, high pitched tile roofed brick building, with an attic and huge basement, made complete with elaborately carved window frames and a mansard roofed tower. Its architecture is described as being a "Flemish Gothic" design, blending Gothic and Romanesque styles.

Designed by Architect E. O. Fallis, this large, 113,000 square ft., rectangular building, which sits sideways on its lot, opened in 1905 as the new teaching convent for nuns in the the Ursuline Order of the Sacred Heart, St. Ursula Academy. In 1922, the Mary Manse College was established here, and finally became a retirement home for nuns.

When the retirement home closed, the building stood vacant for a few years until 1985, when a man with a dream, Pat Tansey, rented the woe be gone building and Gerber House, in hopes of creating a community art center. The Collingwood Arts Center was started, while rescuing these classic buildings from decay, and saving them from a wrecking ball in their future. At some time, the property was bought outright from the Ursuline Order. A third Victorian, next to the Gerber House was also bought. It is currently being restored.

The Collingwood Arts Center is divided into 4 sections: Gerber House, a Theater Wing, a Dorm Wing for artists, and Studio Wing. The basement is used for storage and laundry facilities. The Attic was the place where the work rooms of the convent were located and was built to be light and airy.

Some nuns became really attached to their convent work here. They refuse to let go from this world to go to the other side.

In the 1950s, a distraught nun hung herself in the basement.

When the building was vacant for awhile, an occult group broke in and had ceremonies in the basement area.

From the 1870s through 1900, people would dump their sewage into The Maumee River. The untreated water was used as a water supply. The people of Toledo suffered and died from Typhoid and other water-borne diseases, until the city of Toledo built a treatment plant and opened it on February 2, 1910.

The sociable entity of a female dressed in a wedding gown appears in the back and front parlors, in front of the living, who are using the parlors for their events.

It is theorized that if could be a daughter of one of the families who lived here, scheduled to be married, but died of a disease from the bad river water before she could be married.

It could also be a young novice in training, who was getting ready to join the order as a bride of Christ, but she died before she could do so.

A group of happy little children entities run around the hallways of the second floor, hiding from each other in the closets. They are seen and heard. The children are usually hit hard in epidemics, and perhaps these children also died in a Typhoid epidemic.

The ill-humored, hate-filled entity of a nun haunts the back rows of the auditorium, but makes the third row of the balcony, stage left, her favorite seat in the house to crabbily watch the living. Performers on stage rehearsing have seen her glaring at them from her seat, from her ghostly peanut gallery.

If the living invade her space, this entity has been known to throw sparks and ugly images at them. As Chris Woodyard describes her in her book, Haunted Ohio III, this is an entity so full of hate that it radiated from her face and eyes, when she turned her ashen face toward Chris.

This same hate-filled nun, when she isn't in the theater, also haunts the halls and cells of the old convent.

A resident was minding her own business, and was on her way to get a soda from the machine, when this "molecular windstorm" appeared in the middle of the hallway, going right through her, making her feel enraged for a few minutes and then ice cold.

Chris Woodyard reports in Haunted Ohio III that she felt an oppressive presence when she entered the center, which put pressure on her back for a while, causing her to hunch her shoulders.

The spirit of a loving nun with a bright smile and friendly countenance, who smiles and waves at the living, likes to spend her time sewing clothes on her plain of existence, perhaps trying to finish some projects, enjoying her work for the Lord.

The Basement is haunted by one to three rather scary entities.

The entity of the nun and/or an entity conjured up by the occult group.

A black-hooded entity has been haunting the basement and the stairways to the basement and to the Gerber House, and has been seen gliding around, giving off "anxious feeling" energy. Past residents of the convent who lived here in the 1950s asked about this haunting when they visited with the manager. This haunting had been going on since the 1950s, after a fellow sister killed herself.

A darker entity described as a unearthly, dwarfish figure dressed in a hooded black robe, also gets its chuckles aggressively gliding up and down the staircases, and haunting the passageways of the basement.

Residents call another entity the shadow man, who brushes past them as they go down to the basement in the laundry room.