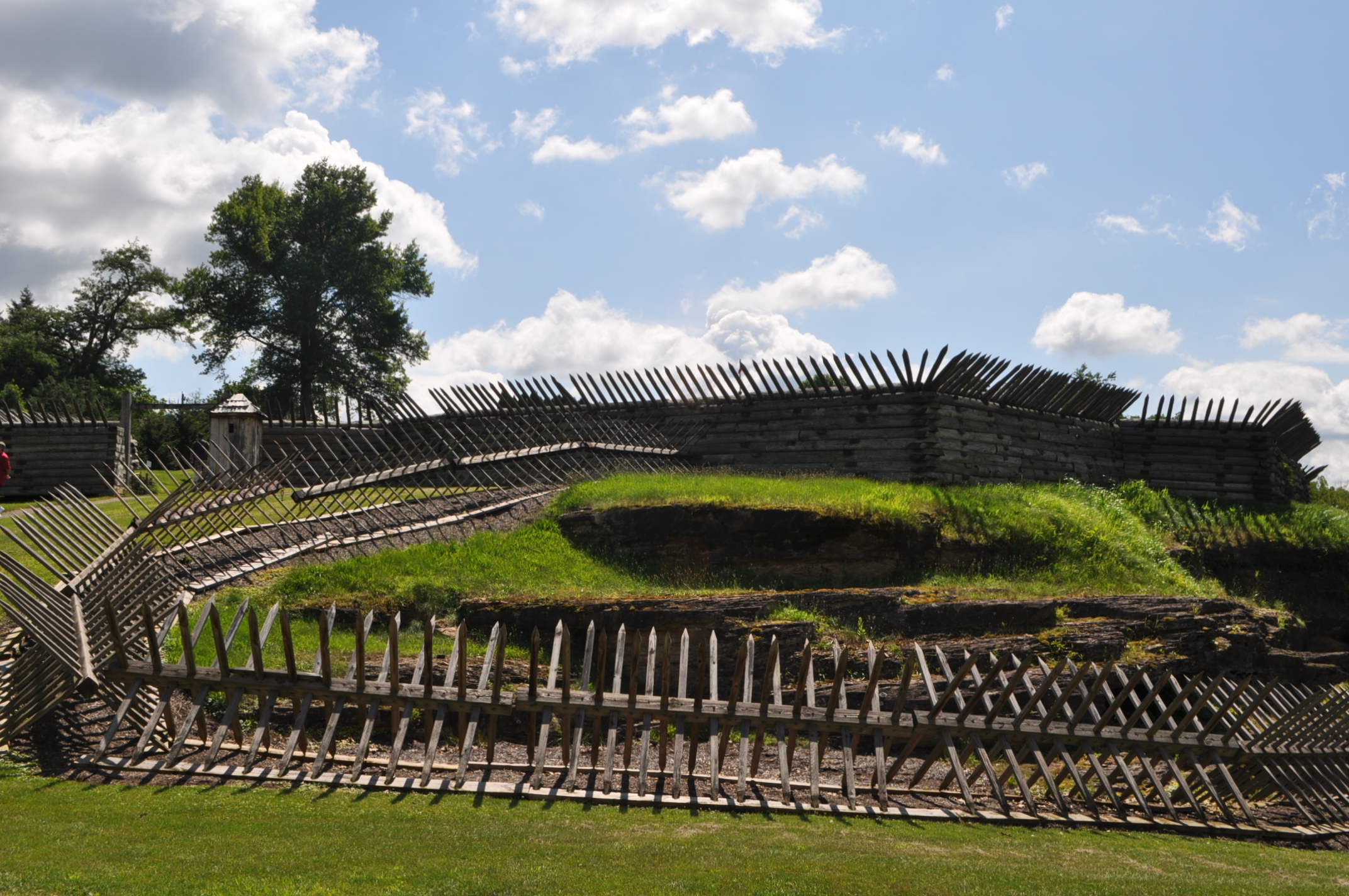 This fort was used during the period of the French and Indian War and Pontiac’s War. On the same property is a museum with many artifacts from that time period.

The history of Fort Ligonier began in September 1758 and was concluded in March 1766, embracing the period of the French and Indian War and Pontiac's War. Today, the story of this time period is told through the remarkable Fort Ligonier museum exhibits and a fully reconstructed and restored fortification.

In the middle of the eighteenth century, two European powers, Great Britain and France, contested ownership of the vast inner basin of North America. The resulting conflict became known in America as the French and Indian War, which developed into a global struggle for empire later called the Seven Years' War.

Victories over Virginia Colonel George Washington at Fort Necessity in 1754, and British General Edward Braddock at the Monongahela River in 1755, gave control of the strategic forks of the Ohio River (modern Pittsburgh) to the French. This site was the gateway to the west.

In 1758, William Pitt, British secretary of state for the southern department, assigned to John Forbes, a Scottish brigadier general in America, the task of securing the backcountry, which meant seizing Fort Duquesne, the French post at the forks.

Forbes demonstrated the care that military professionals used to protect an army proceeding through enemy country, by favoring a European strategy called the "protected advance." A deliberate, careful march across hostile territory was advised, consolidating advances by building posts and supply depots. Fort Ligonier was the final post on the Forbes Road and the staging area in southwestern Pennsylvania to attack Fort Duquesne. The most elaborate fortification undertaken in Forbes's expedition was Fort Ligonier, "The Post at Loyalhanna."

By 1758, General John Forbes was assigned the daunting task of seizing Fort Duquesne, the French citadel at the forks. He ordered construction of a new road across Pennsylvania, guarded by a chain of fortifications, the final link being the "Post at Loyalhanna", fifty miles from his objective, to serve as a supply depot and staging area for a British-American army of 5000 troops. The fort was constructed in September 1758. By late October, Washington had arrived at Loyalhanna, but not before the defeat of a British force at Fort Duquesne on September 14, and the successful defense of Loyalhanna from a French attack on October 12. Heavily outnumbered, the French abandoned Fort Duquesne, which Forbes occupied on November 25. He designated the site "Pittsburgh" in honor of Secretary of State William Pitt. Forbes also named Loyalhanna "Fort Ligonier" after his superior, Sir John Ligonier, commander in chief in Great Britain.

The People of Fort Ligonier

Provincial troops consisted of volunteers recruited, equipped and paid by individual colonies. At Fort Ligonier, these troops were from Pennsylvania and Virginia, with detachments from the "Lower Counties" (now Delaware), Maryland and North Carolina. Local militia served at the fort in 1763.

Commissioned officers formed a close elite group separated by a wide gulf from the other ranks, or enlisted men, who held a position something like that of tenants. Standing between the two was a distinct class of managers: sergeants and corporals, who enforced work and discipline.

Officers were entitled to extra rations to provide for guests and, for field officers, aids and staff. Young men purchased commissions in the British army, and promotion required seniority, merit, additional purchases and, often, a friend in power. Colonels of standing regiments were appointed by the King. Officers could receive special rank during service abroad. Forbes was commissioned a brigadier general "in America only".

The Reconstruction of Fort Ligonier

Eight acres of the original site of Fort Ligonier have been preserved, with the subsurface features restored and the above-ground elements reconstructed. The inner fort is 200 feet square, defended by four bastions and accessed by three gates; inside is the officers' mess, barracks, quartermaster, guardroom, underground magazine, commissary, and officers' quarters. Immediately outside the fort is General Forbes's hut. An outer retrenchment, 1,600 feet long, surrounds the fort. Other external buildings include the Pennsylvania hospital (two wards and a surgeon's hut), a smokehouse, a saw mill, bake ovens, a log dwelling and a forge.

"Ghosts and Legends of Fort Ligonier," a book written by Cassandra Fell and Dr. Walter L. Powell questions the possibilities of lingering spirits at the reconstructed fort and museum galleries. After all, the fort was the scene of countless tragedies during the French and Indian War period.

One story tells of visitors who claim to see the eyes of the portraits of Sir John Ligonier and Sir John St. Clair moving in the Gallery of Portraits in the museum.

A museum employee reported seeing the image of Phoebe St. Clair standing in the parlour in a yellow silk dress and the sounds of someone entertaining in the St. Clair room at the museum. When the employee was shown St. Clair's wedding dress, she claimed it was the same dress.

"I always get a strange feeling when I walk by the St. Clair room," said employee Candace Gross, who has worked as a secretary at the fort for 15 years. "I get the feeling of a presence, but it doesn't spook me. It makes me want to know more about it."

Gross said visitors and other employees said they heard knocking, bagpipes playing or glasses clinking. Gross said the encounters were more frequent during the renovation of the museum several years ago.

To learn more about the legends of Fort Ligonier, the book is available at the fort's gift shop.