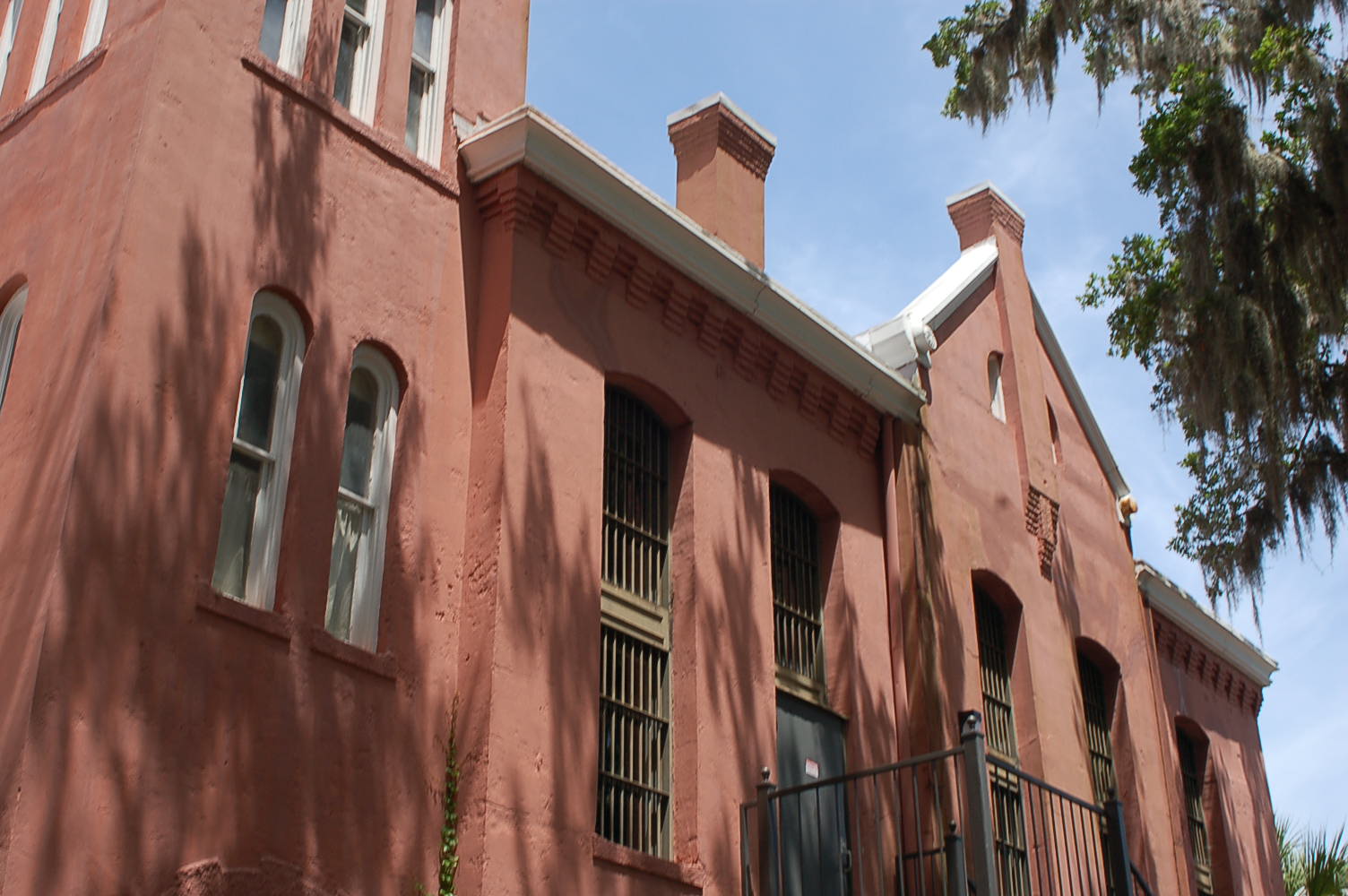 The Old Jail Museum, formerly the original Saint John County Jail; (1891-1953), can be found near the corner of San Marco Avenue (A1A) and Missouri Avenue, between Dufferin Street and Mantanzas Avenue; not far from the Florida Heritage Museum.

In 1891, with the opening of his Ponce de Leon hotel, Flagler wanted to ensure a safe and pleasant environment for his patrons by creating a secure fortress to house criminals. It was important to Flagler that the exterior appearance of this fortress wouldn't disrupt the majestic atmosphere of the Ancient City. In order to accomplish this, it was designed with a Romanesque Revival style that gave it the distinct appearance of a Victorian house without the interior comfort and charm. It was almost unrecognizable as a jail apart from the barred windows.

Also, the original jail was too close for comfort at the time, so Flagler asked that the new jail be built at a further location. P.J. Pauley Jail Company, the same people responsible for building Alcatraz in San Francisco, were employed to construct the prison. The jail served the city of St. Augustine until 1953. It held some of the most violent and masochistic criminals and carried out capital punishment on a set of gallows on the property.

In 1954, only a year after the jail closed, it was transformed into a local attraction. The building underwent restoration in 1993 by owner Henry L. "Slim" McDaniel. Today, the Old Jail provides guests to St. Augustine with a glimpse into the history of the penal system and the daily life of its prisoners. The St. Augustine Old Jail was added to the U. S. National Register of Historic Places in 1987.

The Old Jail is located at 167 San Marco Avenue, just north of the downtown district. Free parking is available onsite.

One may think that they didn't care that the men suffered a tortuous death. For the philosophy of this jail was that the prisoners were there to be punished, not rehabilitated. However, in Dave Lapham's book, Ancient City Hauntings: More Ghosts of St. Augustine, he reports that at some time, once the officials realized that after a medical experiment was conducted, during the hanging of a cooperative condemned man, the executions stopped at this jail.

Jail conditions supported this philosophy though. Food served consisted of grits in the morning, tac if they were sent out to work, and beans for dinner. Beds were made of Spanish moss, the perfect breeding ground for red bugs, who are blood-sucking varmints. Blankets were an optional luxury.

There was no protection from the whims of the guards, or the sheriff warden, and solitary confinement and other overly harsh punishments were dished out for seemingly minor offenses. Through various studies, researchers say that people who have absolute control over others have the tendency to abuse them. The solitary confinement area had no windows and no bed.

Besides having no glass in the barred windows, there was also no heat, no running water, and no sanitation for the disposal of human waste, as a form of punishment. Only a bucket was provided for every 4 prisoners. Sick prisoners were kept among the general population. At this time, the prison authorities in Florida didn't understand the necessity of having proper sanitation, but they should've known better than to put the sick in with the well inmates.

What probably kept the prisoners from going insane, was the required work program. The prisoners were put on work details in the community, bringing money into the county's coffers. The conditions were hard, and the hours were long, but it did get them out of a stark environment, and gave them the opportunity to catch little animals to supplement their bleak diet, while working. If they could escape, they knew that the populous would help them, as this program was not popular with the people, who saw the abuse.

One of the many complaints to those living close to the Old Jail is the frequent sounds of footsteps walking inside. Loud, clunky noises indicate that these footsteps belong to the disembodied souls of the criminals that once lived and died there. Guests touring the facility have also reported this phenomenon.

At any given time, visitors and workers at the Old Jail sense the aroma of sewage in the air; although there is none to be found on site. Others report a sickeningly sweet smell, which many describe as that of molasses boiling on a stove. But despite the daily cleanings and air fresheners, these two aromas seem to linger, just like the ghosts.

Although dogs once lived at the Old Jail, there are no furry residents living there today. Even still, it's believed that the reported sounds of dogs barking belong to these long lost pooches, which were family pets of the sheriff from centuries ago.

It probably comes as no surprise that those who tour the Old Jail hear voices in the cells and hallways. There are many reports of wailing, moaning sounds coming from the maximum security and solitary confinement areas and some visitors have even reported hearing the voice of a little girl coming from the sheriff's quarters. Others have heard someone whistling at them; and several guests have reported hearing a dastardly laugh in one of the women's cells.

Haunted places often have areas that people describe as cold spots and the Old Jail is no exception. There have also been many accounts of people feeling as if someone with a cold hand is touching their shoulder. Other reports from visitors include the sensation that someone is tugging at their hair and that someone is blowing on them as they walk by.


It is not surprising that this old jail is haunted. Most locations that house the incarcerated are a magnet for paranormal activity, both residual and intelligent. This location is no different. There are several reports of inmates dying from disease, abuse and attacks by other inmates, and there are even reports of the sheriff's daughter dying from either disease or an accidental death. Sudden, accidental or per-mature deaths can cause entities to remain at the location where their human existence ceased.

Just outside the building in the courtyard of this location is a gallows that was used actively for executions as well. These executions, were not often quick at times and were extremely painful. It is possible that the spirits of these prisoners did not want or feared crossing over since they felt guilty of their humanly crimes and were afraid of their own judgement.