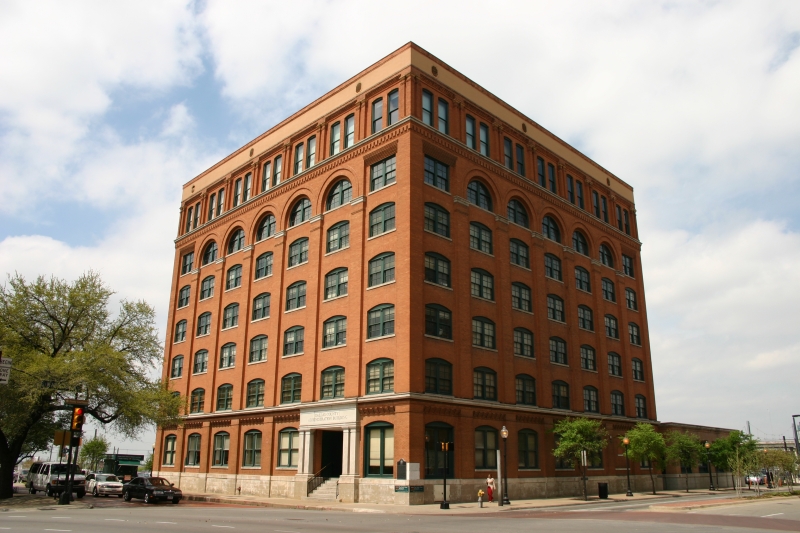 The site of the building was originally owned by John Neely Bryan. During the 1880s, Maxime Guillot operated a wagon shop on the property. In 1894, the Rock Island Plow Company bought the land, and four years later constructed a five story building for the Southern Rock Island Plow Company. In 1901, the building was hit by lightning and nearly burned to the ground. It was rebuilt in 1903 in the Commercial Romanesque Revival style, and expanded to seven stories. The land was bought in 1937 by D. Harold Byrd, who by 1963 had leased it to the Texas School Book Depository.

TEXAS SCHOOL BOOK DEPOSITORY. The Texas School Book Depository, the building identified by the Warren Commission's report on the Kennedy assassination as the location from which Lee Harvey Oswald shot the president, is at 411 Elm Street in downtown Dallas and is now the Dallas County Administration Building. The building has seven floors and a basement and forms a 100 by 100 foot square with 80,000 square feet of space. The Sixth Floor, on the floor Oswald is said to have used, has been made into a memorial to President John F. Kennedy.

The site of the building was originally owned by John Neely Bryan and during the 1880s Maxime Guillot operated a wagon shop on the property. In 1894 the Rock Island Plow Company bought the land and four years later built a five story building on the property for the Southern Rock Island Plow Company, its Texas division. A fire caused by lightning destroyed the original building in 1901, and the plow company rebuilt the present building, in the commercial Romanesque Revival style, on the old foundation by 1903. In 1937 the Carraway-Byrd Corporation bought the property but defaulted on the loan, and the property was bought by Col. D. Harold Byrd.

By 1963 Byrd had leased the building to the Texas School Book Depository Company. It was while this company leased the property that Oswald shot President Kennedy from the southeast corner of the sixth floor of the depository on November 22, 1963. Following this infamous incident the sixth floor was closed to the public for twenty-five years. In 1970 Byrd put the building up for sale and shortly afterwards the School Book Depository Company moved out of the building. The notoriety of the building, as well as its location in an area of real estate development, aroused great interest, and the building was purchased by Aubrey Mayhew, a Nashville, Tennessee, promoter who wanted to develop the building into a John F. Kennedy museum. Mayhew's efforts were unsuccessful, and a fire set by an arsonist on July 20, 1972, destroyed part of the building. It was foreclosed and returned to the Byrd family on August 1, 1972.

Efforts to tear down the building were blocked in 1977, when a bond issue was passed and Dallas County purchased the building. Four years later the building was dedicated as a Texas Historic Landmark and was renamed the Dallas County Administration Building. Two floors of the building were renovated to hold the Dallas County Commissioners Court, and four more were used by Dallas County. Plans for the preservation of the infamous sixth floor, which had remained closed since the president's assassination, were surrounded by controversy. In 1978 Dallas County's government, with the aid of the Dallas County Historical Commission and the Texas Historical Commission secured funding from the National Endowment for the Humanities for an advisory panel that recommended the development of the sixth floor as an exhibit of John F. Kennedy's life and death. After funding for the exhibit was secured, construction on the exhibit began and was completed in 1988. The exhibit opened on President's Day, February 20, 1989, and is a 9,000-square-foot display called the Sixth Floor. The display serves as an educational exhibit of President John F. Kennedy's life and death, all placed within the context of the president's era. The exhibit includes photographs, artifacts, documentary films, and interviews. The Sixth Floor visitor's center is on the north side of the building, where an exterior elevator transports visitors directly to the exhibit. In 1992 the exhibit continued to attract visitors and provide them with information on the history and legacy of John F. Kennedy. BIBLIOGRAPHY: Dallas Morning News, April 11, 1970. Claude W. Dooley, comp., Why Stop? (Odessa: Lone Star Legends, 1978; 2d ed., with Betty Dooley and the Texas Historical Commission, Houston: Lone Star, 1985). Conover Hunt, "Turning Controversy into History," Heritage 10 (Summer 1992). Connie Sherley, "The Sixth Floor: Tribute to a Fallen President," Texas Highways, November 1990. Ray Ydoyaga, "Depository Retains History Sans Tragic Face," Texas Architect, July-August 1984.


The Texas School Book Depository Company moved out in 1970 and the building was sold at auction to Aubrey Mayhew, a Nashville, Tennessee music producer and collector of Kennedy memorabilia, by the owner D. H. Byrd. In 1972, ownership reverted to Byrd, and the building was purchased in 1977 by the government of Dallas County. After renovating the lower five floors of the building for use as county government offices, the Dallas County Administration Building was dedicated on March 29, 1981. On President's Day 1989, the sixth floor opened to the public (for an admission charge) as the Sixth Floor Museum of assassination-related exhibits. On President's Day 2002, the seventh floor gallery opened.

On May 4, 2010 burglars attempted to steal a safe from the Sixth Floor Museum, but fled when "they were confronted by a security guard", leaving the unopened safe suspended from a winch on the back of a truck.