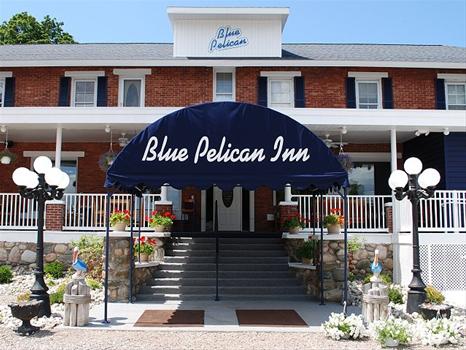 The Blue Pelican Inn has been known by many names. It was built in 1924 by Art Carpenter, Joe Blakely and Jack Garrison, all local stonemasons.

The Blue Pelican Inn has been known by many names. It was built in 1924 by Art Carpenter, Joe Blakely and Jack Garrison, all local stonemasons. It was owned by a stock company and the whole project
was headed by Orrin (O.P.) Barber, with help from John Smith. It was named WE-GO-TA.

Emmons (E.B.) Gill lived in the hotel and ran it. The bar and dining room were at the north end of the hotel with a total of 22 rooms and only 4 bathrooms. For years it was a favorite location for traveling salesmen.
At some time during this period, the name was changed to the Central Lake Hotel.

In April of 1946, Charles A. (Art) Cronover and his wife Ruth, and Archie S. Dayton, purchased the hotel.
The rooms with baths were rented for $4.50 per night and without a bath they were $2.50.  Someone always met passengers at the train station who were wishing to stay at the hotel.

In the mid-1960’s, Gary Morse purchased the hotel and changed the name to The Palace.  Morse moved the bar to the south end of the hotel and totally remodeled it.  The second floor was renovated to include living quarters for the family and the Brownwood offices. The Palace was also the scene of a gala New Years Eve party for many years.

In the mid-seventies, Doug and Mary Lou Denny purchased The Palace and changed the name to The Lamplight Inn. The menu featured steaks, seafood and prime rib specials. The overnight guests utilized the upstairs bedrooms for a bed and breakfast.

In 1986, Ted and Betty Strezempek bought the Lamplight Inn along with their sons Tracy and Scott. They improved on the fine dining.

In 1996, the Inn was sold to Mike and Mary Ellen Murphy. They moved their family from Dearborn, Michigan and changed the name to Murphy’s Lamplight Inn.

Chris and Merrie Corbett purchased the Lamplight Inn property from the Murphy’s in October 2008 and changed the name to The Blue Pelican Inn. The Corbett’s added additions of a new kitchen and a covered porch to the building. The seven hotel rooms, as well as the bar and the main dining room were totally remodeled.  Also, the Side Door Saloon was remodeled and reopened. The bedrooms are now being rented and Brothers Restaurant in town offers breakfast for the visitors of the hotel.

Upon purchasing the property, Corbett investigated some of the history of the hauntings reported by former employees, owners, guests and the community. The property has been visited by paranormals, ghost busters, and investigation groups who are looking for paranormal happenings over the years.
Before the hotel was purchased by the Corbett’s, the three main stories that existed were of Mrs. Gill, who managed the property in the 20’s and 30’s and came back to stay in the 1950’s, where she passed away in one of the rooms.

The second ghost is a story of a young woman who is eloping from the second floor outside window, where she tripped on her gown and fell to her death.

The third is a little girl who with her school books is looking out the attic dormer, as if she was waiting inside a school. It was later learned that the property was used as a temporary school when the original Central Lake School burned down.

Another instance is of a young lady (the daughter of a paranormal) working in the hotel who was escorting a person out the front door, she opened the door for the person, but no one else could see this person.

Several other instances of sightings and sounds abnormal to normal building noise have been brought to Corbett’s attention.

The following are occurrences since the property was purchased in 2008.

The Inn was visited by True Investigations.net./Darkminds.biz. Just prior to their visit, Tina Clark was doing construction cleanup when she saw someone in the linen closet. She was startled, but when she returned to the closet, she saw no one.

While visiting upstairs and closing up at night, Chris Corbett heard noises that were not associated with building settlement. These noises were muffled sounds, banging and a light scratching. When Corbett spoke out to the noises, the sounds stopped and there was no response except quiet. When he hears sounds now, he just asks, “How are you doing tonight?” The sounds then stop and he hopes they will not answer.

Darkminds.biz (True Investigations.net) visited in March 2009. Prior to them arriving they stated that there seemed to be more activity of ghosting when an old building was under construction. Lyle Loveless’ father, who was visiting and helping with construction, was re-hinging the linen room door when he heard noises banging on the other side of the wall that has a hallway that leads to the front of the building.
When he stopped making noise, the noise continued. He glanced around the corner to see where the sound was coming from and there was no one there and the sound stopped. After the True investigation Team arrived, they said they would put microphones, cameras and heat detectors in the upstairs and take a portable camera to the basement area also. They left the building and returned around 7pm. As Corbett was going upstairs to connect the network and fire alarm system in the office area, he proceeded down the hallway where he had an eerie feeling from his head to his toes, similar to a fright, but not quite as intense.
This continued for about ten steps. Still not really believing, he went to the office, and worked on his project. When he stepped out into the hallway again, he felt the same sensation which continued until he made the turn down the stairs. Upon entering the bar area, he explained this feeling to the team.
Two of the members of the three person team stated that they had had similar feelings when they were upstairs, but didn’t want to say anything. At approximately 9:30 pm, Corbett left the building. During this time Keith Verellen, General Manager, came to see what activities were going on and met with the True Investigation crew.

As he was leaving the upstairs, the feeling came to him also and continued with him to the bottom of the steps where it let him go. He left. Corbett returned to the Inn just before midnight. The True Investigation crew did not know that Corbett and Verellen had had the same feelings, and only until a week later after comparing stories, did the two find out that they had experienced similar events that had happened.

Shortly after opening the Inn in May, the hotel rooms upstairs were being painted. Ken Graham, the Bar Manager, when closing one night, was in the parking lot when he looked up and saw something looking out one of the bedroom windows. Since he was alone, and no one was staying in the bedrooms, he went back into the building and started up the steps, but changed his mind. Instead, he exited the building.

The next day, he went to the roof of the new kitchen with Lyle Loveless in order to see which window someone had been looking out of.  The window was boarded up by the shower of the bathroom on the inside, but from the outside, the window appeared to be a real window.

After closing one night, Verellen forgot his keys. Corbett was in the parking lot with his keys and lent them to Verellen to go back in and get his keys. On the way back, again, Verellen felt the presence of something as he had felt back in March at same spot at the top of the stairs. It subsided once again as he reached the bottom of the stairway. He stated to Corbett once outside, quite emphatically, that “he had the he bee jee bees”!!

A few more weeks passed, and the granddaughter of Mrs. Gill, the woman who died in one of the hotel rooms, asked that the owner sit down with her and chat. The granddaughter showed Corbett photos of her grandparents and she stated that her grandmother is the one who haunts this place. Her grandson asked his grandma which room did she die in and she said she didn’t know, reaffirming the story of Mrs. Gill.

Over the summer months, several people have come to the restaurant and told stories of times that they had worked or lived there and all of them have vivid recollections of haunted happenings or self-imposed scares. Odd things continue to happen to this day that are unexplainable and stories continue to be told.
Please come and visit us because in spite of all the weird happenings, everything has been very friendly!