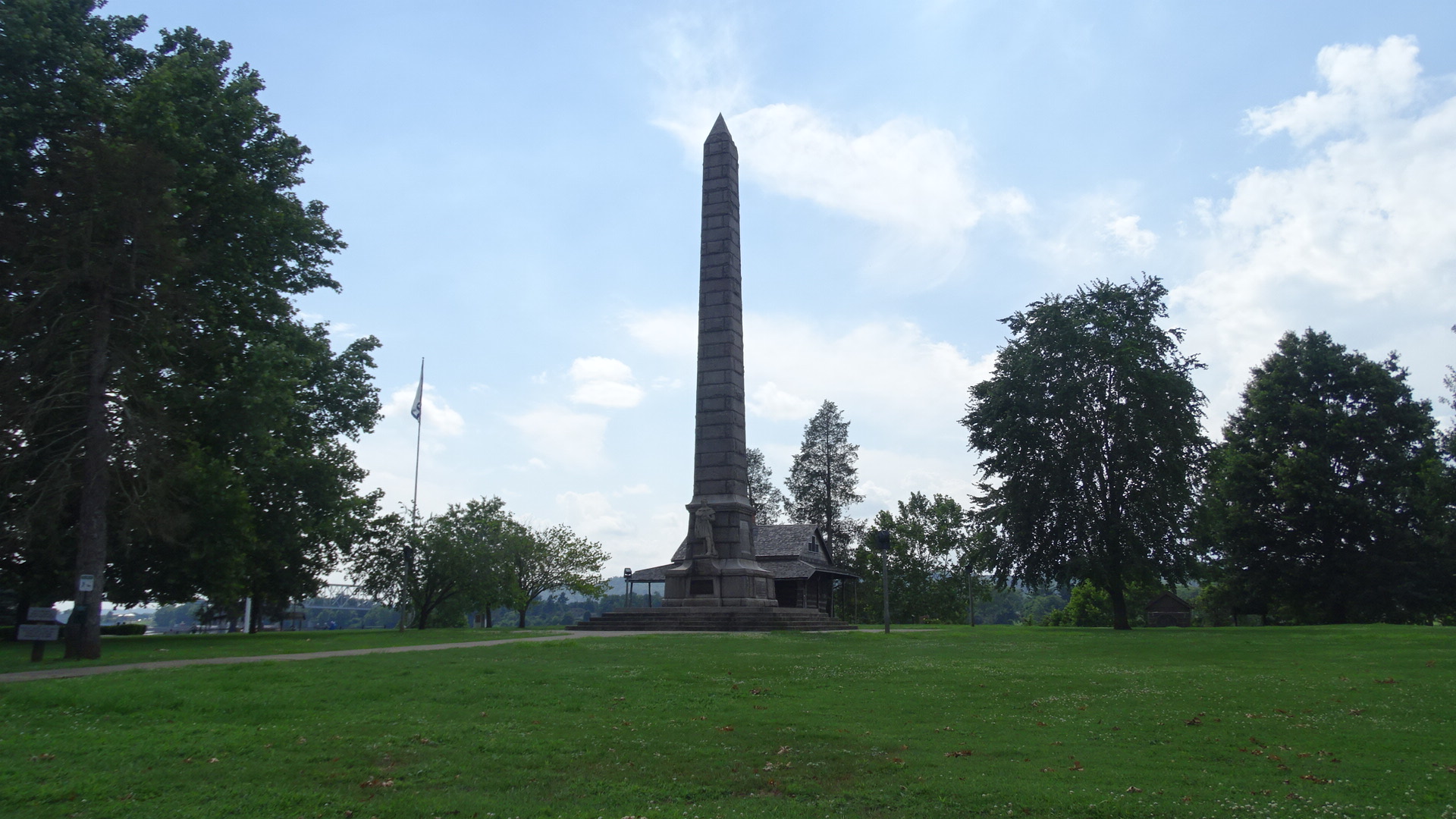 Tu-Endie-Wei State Park is located at the confluence of the Kanawha River and the Ohio River in downtown Point Pleasant, West Virginia.

Tu-Endie-Wei State Park is located at the confluence of the Kanawha River and the Ohio River in downtown Point Pleasant, West Virginia. The park commemorates the Battle of Point Pleasant, fought between the settler militia of Virginia and the forces of Shawnee Chief Cornstalk on October 10, 1774. The militia victory by the settlers weakened the alliance between native forces and the British and freed up settlers from western Virginia to cross the Allegheny Mountains and join in the American Revolutionary War.

The name "Tu-Endie-Wei" refers to the Wyandot Indian phrase meaning "the point between two waters" in English.

At the junction of the Ohio and Kanawha Rivers, Tu-Endie-Wei stands as a monument to commemorate the frontiersmen who fought and died at the Battle of Point Pleasant. On October 10, 1774, Colonel Andrew Lewis' 1,100 Virginia militiamen decisively defeated a like number of Native Americans lead by the Shawnee Chieftain Cornstalk in a bloody, day-long battle. At the end, 230 Native Americans were killed or wounded and more than 50 Virginians had lost their lives, including Colonel Charles Lewis, brother of the commanding officer. Considered a landmark in frontier history, some believed the battle to be the first of the American Revolution. This action broke the power of the ancient Americans in the Ohio Valley and quelled a general war on the frontier. Significantly, it also prevented an alliance between the British and Native Americans, one which could very possibly have caused the Revolution to have a different outcome, altering the entire history of the nation. In addition, the ensuing peace with the Native Americans enabled western Virginians to return across the Allegheny Mountains to aid Revolutionary forces. The battle is recognized as the decisive engagement in a proactive series of Indian wars. The monument derives its name "Tu-Endie-Wei" from a Wyandotte word meaning "point between two waters."

Revolutionary War Figure. Known as "Mad Ann" Bailey, she was born in Liverpool, England, and came to America at age 19, probably as an indentured servant. Her first husband, Richard Trotter, was killed at the Battle of Point Pleasant, West Virginia on October 10, 1774, of which battle Congress called the first battle of the American Revolution. Thereafter Ann took up "male dress" and the rifle and tomahawk, and she became a frontier scout, messenger, spy, and Indian fighter. She was the subject of many adventures both true and legendary. She became known as the "White Squaw of the Kanawha", but was more widely known as "Mad Ann". She married her second husband, John Bailey, in roughly 1790 and moved with him near present-day Charleston, West Virginia. Her most famous exploit was in 1791 when Fort Lee, near Charleston, was under siege by Native Americans. When the fort's powder supply ran low, Ann volunteered to go for help. She escaped the fort and the besiegers, rode a hundred miles to Fort Union (present-day Lewisburg, West Virginia), and returned on the third day with powder, thereby saving the men and the fort. Her second husband was later killed, and Ann lived with her son, William Trotter, along the Kanawha River. In 1818 they moved to Harrison Township in Ohio where in her old age she taught school. She died there in 1825 at age 82 or 83, being buried in Point Pleasant, at the site of her first husband's death.


Shawnee Chieftain. Born in what is now Western Pennsylvania he was known as Hokolewsqua among his people. The Shawnee migrated to the Ohio Territory as they gave ground in the face of expanding American settlement. He fought with the French against the British during the French and Indian War. He continued to battle settler encroachment into Ohio Territory, and in 1763 he led an expedition against settlements along Muddy Creek in Greenbrier County in what is now West Virginia. In the early 1770s, Cornstalk became the leader of a confederacy of Indian tribes living in the Territory. He led a mixed group of Shawnee and Mingo warriors against troops from Virginia at the Battle of Point Pleasant near the juncture of the Ohio and Kanawha rivers in present day West Virginia, where both sides suffered heavy losses, and Cornstalk was forced to withdraw. He was then forced to accept the Ohio River as the boundary line in the subsequent treaty. During the American Revolution, Cornstalk worked to keep the Shawnee neutral, representing his people at treaty councils at Fort Pitt in 1775 and 1776. When the British attempted to build a coalition of Indians to fight against the colonists, Cornstalk refused to join, though many Shawnees hoped to take advantage of the war and use British aid to reclaim lands lost to the Americans. By the winter of 1776, the Shawnee were divided into a neutral faction led by Cornstalk, and other various militant bands. In the fall of 1777, Cornstalk and a small party made a diplomatic visit to the American Fort Randolph, Cornstalk and his two companions were detained by Captain Arbuckle, the fort commander, who had decided on his own initiative to take the Shawnees hostage. According to an nineteenth century History of Kanawha County, two young men were later fired upon and one was killed, and the militia blamed Cornstalk's son, Elinipsico, who had come to check upon his father. Elinipsico denied the charge, but Cornstalk, his men, and his his son, were summarily shot to death. American leaders were thoroughly alarmed by the murder of Cornstalk who they believed was their only hope of a Shawnee neutrality. Patrick Henry demanded Cornstalk's killers be brought to trial, but no one was arrested and the militiamen who perpetrated the murders were shortly ordered to return home. Subsequently, some inquiries into the murderers were made, but no actions were ever taken. His name has also been recorded as Hokolesqua and Hokolewskwa.