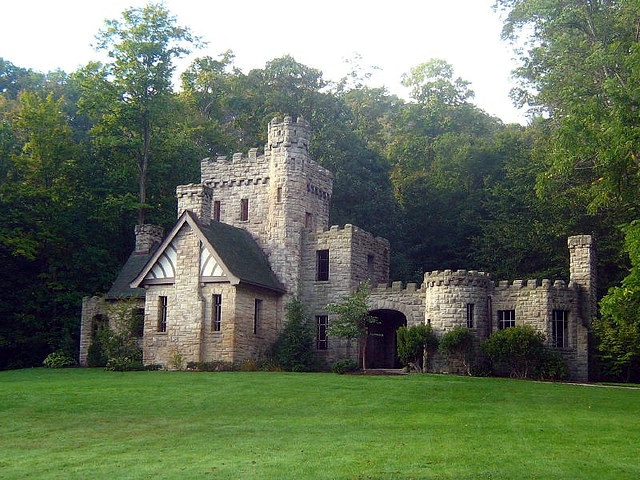 A point of historical interest is the remains of the gatehouse erected by Feargus B. Squire (1850-1932).

A point of historical interest is the remains of the gatehouse erected by Feargus B. Squire (1850-1932). Squire, vice-president of Standard Oil Company began assembling a country estate in the Chagrin Valley in the 1800s, gradually acquiring 525 acres. He built a gatehouse of stone quarried on the property, eight miles of gravel roads and a pond, but sold the property in 1922. Three years later it was purchased by the Cleveland Metropolitan Park Board as the heart of North Chagrin Reservation.

Just outside Cleveland's city limits lies the section of the Metroparks District known as North Chagrin Reservation. This area is home to a golf course, a wildlife sanctuary, and according to legend, one restless ghost.

At the turn of the century, F.B. Squire, a wealthy businessman, purchased over 500 acres of land near Cleveland. Squire, an avid hunter, loved the outdoors and had always dreamed of living in the country. His plan was to build a summer retreat for himself and his family.

Building began with Squire erecting a three-story building that was to eventually serve as the gatehouse for his estate. In the basement of this building, Squire constructed an ornate trophy room and filled it with the heads and skins from his hunting trips. The only problem with Squire's dream house was that his wife not only despised hunting, but also the whole country lifestyle. When her husband first began constructing the manor house, Mrs. Squire would often stay at their home in the city. Eventually, in an effort of appease her husband, she began journeying out to the property. According to local legend, Mrs. Squire's displeasure over the summer retreat resulted in her developing insomnia. It was said that she often walked the gatehouse at night, carrying a small red lantern for light.

Late one evening, for reasons never fully understood, Mrs. Squire ventured alone into the trophy room, carrying her red lantern. While in the room, something frightened Mrs. Squire. Some believe it was simply the reflection of her lantern on the faces of her husband's trophies. But there are some that believe Mrs. Squire looked into the face of something unearthly that night. Regardless of what it was, she became so frightened that she attempted to flee the room. In the darkness, she fell and broke her neck.

Upon finding his wife's body, Squire was overcome with grief. Indeed, he blamed himself for his wife's death. He immediately ceased construction on the house and moved back to the city... never to return again. In the 1920s, the property was bought by Cleveland Metroparks, which incorporated it into the North Chagrin Reservation. Locals who remembered FB Squire began calling the abandoned gatehouse "Squire's Castle".

Today, the building is literally a shadow of its former self. Park authorities have removed all but the outside shell of the building. And the basement room where Mrs. Squire met her untimely death has been filled in. To the uninformed, it appears to be nothing more than the quiet remains of an era gone by.

As for Squire's Castle being haunted, there are some who claim to have seen the light of a red lantern in the windows of Squire Castle. And that the lantern is carried by the lonely ghost of Mrs. Squire, a woman forced to walk the grounds of a place she so despised. It makes for a nice story, but despite the fact that it seems highly unlikely someone would turn the basement of a gate house into a trophy room, Mrs. Squire did NOT die on the property. In fact, she died many miles away under quite normal circumstances.

Still, there are far too many people reporting "something" moving around Squire's Castle late at night. So while Mrs. Squire doesn't haunt the castle, maybe, just maybe, someone else's ghost does.