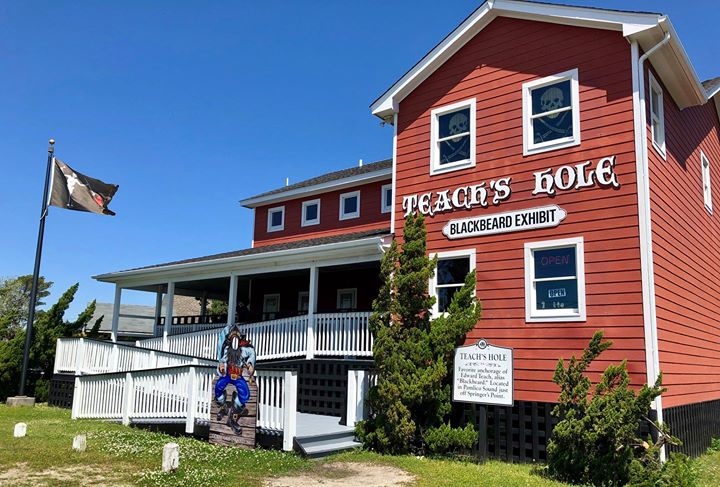 Teach's Hole is a shop where you can buy all things Pirate. It even includes a life size replica of what Blackbeard was believed to have looked like - though we would suggest venturing down to the Point if you want a ghostly look!

Ocracoke Island is part of the Outer Banks of North Carolina, and is located on the southern most part of Cape Hatteras National Seashore. By Springer's point, there is a channel, called Teach's Hole, which connects the Atlantic Ocean and Ocracoke Inlet with the deeper waters of Pamlico Sound.

The rough waters of Ocracoke Island, NC. Here is where Edward Teach, otherwise known as Blackbeard held anchorage before setting out to terrorize Atlantic merchant vessels. His favorite spot to put down anchor was in the channel, known as Teach's Hole.

There is a small beach side forest along the shore of Ocracoke Island, adjacent to "Teach's Hole," the deep-water anchorage where Blackbeard was killed in 1718. This area, called the "Point," is lonely and silent today. Visitors will discover ancient live oaks and cedars forming a protective canopy above the low dunes in this forlorn place. Close to the shoreline everything seems sculpted by the indomitable winds. Bleached shells and bones of shorebirds with regularity are deposited upon the sandy beach and life goes on.

Today Teach's Hole is a shop where you can buy all things Pirate. It even includes a life size replica of what Blackbeard was believed to have looked like - though we would suggest venturing down to the Point if you want a ghostly look!

About 250 years ago, this gruesome figure had his head chopped off near a place called "The Point" known today as "Teach's Hole." It is here he would seek anchorage in his later years!

Edward Teach was killed by Lt. Robert Maynard of the British Royal Navy when his vessel The HMS Ranger and HMS Jane engaged The Adventure captained by Blackbeard near Teach's Hole. It must be noted this time Blackbeard had retired from Piracy having agreed to a pardon by swearing allegiance to the crown. However, the Governor of Virginia, Alexander Spotswood, was not assuaged. He wanted Blackbeard gone for good and sent Maynard for the job.

When they came upon Blackbeard's Adventure, they were hit with a devastating broadside attack. Midshipman Hyde, captain of the smaller HMS Jane, was killed along with six other men. Ten men were also wounded in the surprise attack. The sloop fell astern and was little help in the following action. Maynard continued his pursuit in HMS Ranger, managing to blast the Adventure's rigging, forcing it ashore. Maynard ordered many of his crew into the holds and readied to be boarded. As his ship approached, Blackbeard saw the mostly empty decks, assumed it was safe to board, and did so with ten men, climb aboard The Ranger.

Maynard emerged with his men and engaged Teach in a bloody fight to the death.

Blackbeard fought hard. However, he died from blood loss from suffering so many wounds in close quarters combat with Maynard. He was reportedly loading his pistol when he finally keeled out and collapsed on the deck.

In death, his grisly head continued to inspire dread. Hung from the bowsprit of Maynard's vessel, Blackbeard's head was carried to various ports in eastern North Carolina. Ultimately, it was impaled on a stake at the entrance to the harbor in Hampton, Virginia as a warning to other "Brethren of the Coast" that rule of law had returned to the Outer Banks and the days of Piracy were ending. It gets better. Before sailing from Ocracoke Inlet, Lt. Maynard tossed Blackbeard's body over the side of his ship into dark murky water. Legend has it that the remainder of the pirate crew, now shackled and bound for trial, watched in awe as the headless body of their captain, perhaps in one last act of devilish defiance, swam three times around the vessel before sinking silently below the surface to the depths of the water.

Blackbeard's ghost is said to haunt the land near where he was killed. Islanders that are brave and foolhardy enough to venture out to the Point after dark have routinely reported encountering the ghost of Blackbeard himself, pacing along the shoreline, lost in agony, presumably looking for missing head [or maybe some buried treasure!]