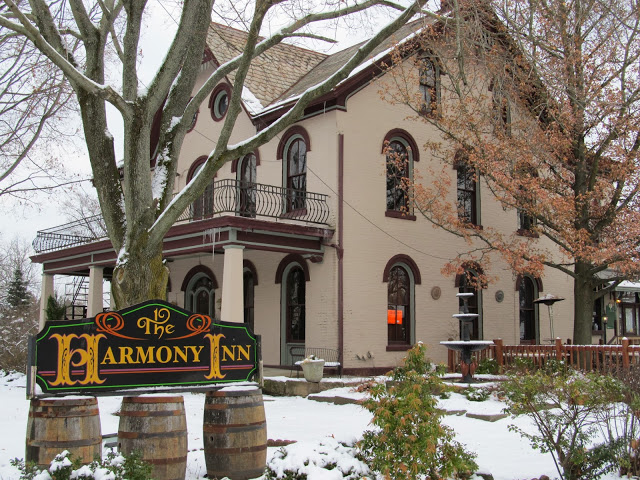 There have been many media reports about the entities who reside at the Harmony Inn, many of which are posted on the wall in the bar area.

Harmony as a town was founded by pacifist German Lutheran German Separatists in 1804. They chose this lovely spot to start their communal group, which flourished until they took the vow of celibacy in 1807. In 1814, the Harmonists sold their property to a group of Mennonites when they moved to Indiana. Though the Mennonite church closed its doors in 1902, many of Harmony's current population are descendants of the Mennonites who settled here

The Harmony Inn was built in 1856, as a private residence of Austin Pearoe, a prominent Banker, railroad operator and executive. Mr. Pearoe wound up having to sell his mansion to a new owner, sometime after the Civil War.

Throughout the mansion's history, it has been used for many purposes, besides a private residence. It became a hotel, a meeting house, a livery stable, a boarding house, a tavern and restaurant.

In the late 1800s, the Ziegler family who transformed the mansion into a hotel and salon, putting this fine building to work. In 1900, the Zieglers added the two story wing to expand their hotel business. Throughout the 20th century, this place had a series of owners. In 1985, Carl Beers and Gary & Betsy Bones bought this building and property which by this time was in need of TLC and restoration. Luckily, these folks fell in love with the place and agreed to start the long process of repair and restoration. One of the big jobs was to strip off the paint on the woodwork inside and restore it to its original beauty.

Besides being a restaurant and private party location, the Harmony Inn on occasion has dinner theatre.

So many people have owned this place and visited it as a business over the years, it is hard to say who the spirits are who haunt the restaurant now. It is thought that some of these entities think of themselves as helpful guardians of the living, really pleased with all the hard work these owners have put into their business and the building, who seem to care as much about the place as the entities did when they were living and owned the property.

The owners say it this way, "This spirit is a sort of guardian of a big block of time and its primary goal is to link the past, present and future."

Local people believe that one of the entities which stay here is the spirit of a man who fell down the stairs and broke his neck. He is called Barney.

Psychics have felt the presence of a young lame, handicapped girl, who limps around the restaurant. Perhaps she was the daughter of one of the owners of this building in the past who succumbed to her handicaps in this building.