The SS Eastland was a passenger ship based in Chicago and used for tours. On July 24, 1915, the ship rolled over onto her side while tied to a dock in the Chicago River. 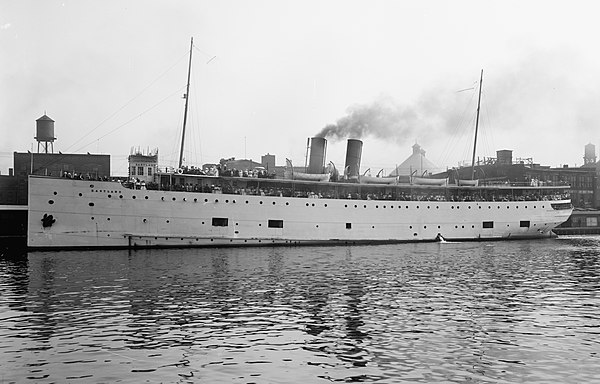 The SS Eastland was a passenger ship based in Chicago and used for tours. On July 24, 1915, the ship rolled over onto her side while tied to a dock in the Chicago River. A total of 844 passengers and crew were killed in what was the largest loss of life from a single shipwreck on the Great Lakes.

After the disaster, Eastland was salvaged and sold to the United States Navy. After restorations and modifications, Eastland was designated a gunboat and renamed USS Wilmette. She was used primarily as a training vessel on the Great Lakes, and was scrapped after World War II.

The SS Eastland, a passenger ship used for tours, was subject to the largest loss of life from a single shipwreck on the Great Lakes in 1915. The ship rolled onto its side while tied to a dock in the Chicago River, causing the huge loss of life of 844 passengers and crew.

The bodies of those affected by the disaster can still be found to haunt the area near the Clark Street Bridge and employees of Harpo Studio (formerly the 2nd Regiment Armory of which many of the bodies were taken) claim to have heard doors slamming, phantom music, unexplained footsteps, disembodied children’s voices and terrifying screams for help.

The Grey Lady, presumably a woman who lost a child during the disaster has been reportedly spotted on security cameras. Walk along the Chicago River at night and it’s said that you can still hear her moans and blood-curdling screams.