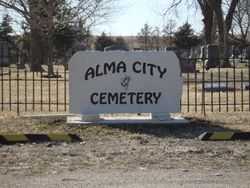 Some time in the 1800's a cruel farmer owned the land that is now the Alma Cemetery. As Alma expanded and land was needed the officials went to the farmer with a generous offer to buy the land. The farmer refused to sell.

Some time in the 1800's a cruel farmer owned the land that is now the Alma Cemetery. As Alma expanded and land was needed the officials went to the farmer with a generous offer to buy the land. The farmer refused to sell.

One night the farmer was pushed into the well by an unknown assailant. Days later when the officials came back with another offer they smelled something foul from the well. The sheriff called off any investigation into the odor and ordered the well be boarded up and left alone.

Many years later, the cemetery was built on the farmer's land and the well has become to be known as 'The Devil's Chair'. Legend has it that anyone that sits on The Devil's Chair will be dragged into the well by the farmer looking for revenge on the townfolk.

Other activity has been witnessed in the cemetery including orbs and strange mists.

The Alma Cemetery is haunted for two reasons. One is the people who are buried there and refuse to leave. Some pictures have been taken during the night up there. (It`s the best time.) The pictures were unbeleivable, there were orbs and mist figures in the pictures. Reason two is the legend of the Devil`s Chair. The story is that in the 1800s a real old mean farmer owned the land that is now the cemetery. About that same time Alma was being built. Towns officials had been trying to get him to sell his land so they could use it for the new town`s cemetery. But he kept refusing to sell it. One day while at his well getting water someone came up from behind him and pushed him into the well. Than about a week later the town officials come out to the farm to try and to get him to sell again. And one of them noticed a smell from the well. The sheriff said it was nothing and ordered for the well to be boarded and locked and that no one is suppose to talk about. So the farmers land became the town`s cemetery. Than in the 1980s some teens decided to go out there and see if they can see the ghost of the old man. One of the teens dared another to sit on top of the closed well. The teen did as he was dared, but suddenly the group heard a sound behind them and turned to see what it was and there was nothing there. So when they turned around to see if there friend was still sitting there. But he wasn`t. Thinking that it was a joke he was playing they left and figured they`d see him tomorrow. But the teen was never seen again. Over the years there have been other stories of people sitting on the Devil`s Chair and never being seen again. Some people say that it`s the farmer reaching through the now old rotted broken boards and getting revenge on the town that took his land away from him. People call it the Devil`s Chair because the man was evil when he was alive and is still evil after death.